Hailing from a distinguished lineage of the Jagtap family, Vijay Jagtap has inherited music as a legacy from his father, Pandit Jagannath Jagtap, a renowned Tabla and Pakhawaj artist, and his grandfather, Shankar Jagtap – a well-known Sarangi player, singer, writer and poet

From the of age of seven, Vijay displayed an exceptional ability to grasp any element of the art and pursued it with dedication. His talent was tuned to perfection by his training and endeavour to develop inner strength and empathy with the classical lineage of Hindustani music. 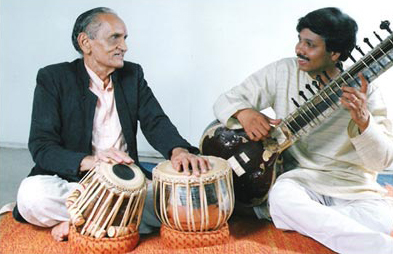 Vijay completed his Masters Degree 1st Class from the Maharaja Sayajirao University of Baroda, India. In 1982 the late renowned sitar maestro Shri Arvind Dighe accepted him as his disciple. This was a turning point in his life. Vijay was educated in the ‘Guru Shishya Parampara’ style, a vision of music with its roots firmly planted in the classical and spiritual aspects of Dhrupad (the traditional style of singing) and whose disciples learn music as a development of the inner self.

In 1982 Vijay had his debut concerts in India. Since then there has been no looking back and he has given numerous concerts in India and abroad, which have been highly acclaimed and noted for their sensitivity, aesthetic appeal and musical insight. He has a fine command of technique, evoking the various textures of the music and its moods. Vijay is known for his innovative blending of Eastern and Western instruments in his creative work. One can feel the deftness of his hands and purity of his spirit by merely listening to his performance, which makes the listener sail through a new sky of reveries.

Between 1989 and 2004, Vijay was a teacher and head of the sitar department at the Bhartiya Vidya Bhavan, London – Europe’s major institution for Indian music and allied performing arts, where he shared his great musical heritage with his students

In 1998 Vijay Jagtap had the privilege to perform at Westminster Abbey in the presence of Her Majesty the Queen and His Royal Highness the Duke of Edinburgh on the occasion of an Observance for Commonwealth Day. He was the first Indian classical artiste to ever perform at the Abbey

“Music is an important tool for healing and can be used effectively to spread harmony, contentment and peace”.

From September 1991 to March 1992, he participated in a documentary made for the Horniman Museum about the Sitar and Indian Classical Music. It explored different aspects of sitar playing techniques, as well as two performances of Raga (traditional classical music).

Vijay has given performances on BBC television and radio. He has tasted success not only as a music performer, but also a composer. His compositions have appeared around the world in the famous BBC series Dangerfield.

Vijay is a dedicated teacher, who loves sharing his musical legacy with his students at the workshops conducted by him.

Vijay’s talent as a musician goes way beyond concert halls, TV and radio performances. He has played in many Ashrams, hospitals and hospices around the world.

Thank you for the invaluable Riyaz session today. I am very happy to have attended as it inspires me to practice and play today. Best wishes.
0
One of the most highly acclaimed British-based Sitar artists. He is renowned for both his technical excellence and brilliance on strings
5
Swarupam,
London, England

Ustad Jagtap-ji is an excellent teacher. His passion and love for music is manifested through his teaching.

5
Hamasa/Sienna
Medical Professional, London, England
Thank you, Guruji, for continuing to teach the children via Zoom during this pandemic. The kids have thoroughly enjoyed your Tabla lessons
5
Sai School London
UK

We thank you for the music you played 'for us'. How truly delightful it was and it was a magical moment for us to hear it.

5
Mike and Lynda
England
My 10-year-old daughter and I have been learning Sitar from Pandit Vijay Jagtap since November last year. From the very first lesson, we both came away feeling very peaceful.  He’s kind, tolerant, patient, cultured, expert in his field and enjoys what he teaches. As for myself, have learnt a lot more in the last few months with Pandit Vijay Jagtap. I would most definitely recommend this teacher. We are both really enjoying our lessons… so much so that I’m waiting for my next child to be old enough to learn from him too!
5
Vrinda Kishori
London
It was an amazing performance leaving an everlasting impression over our minds.
5
Dr Prakash Kumar
Medical Specialist, Reading England
Learning the Sitar with Vijay is always a high point of my week. It is a real privilege to have such a talented and committed musician as a teacher
5
Jimmy Pitt-Watson
London
I am very happy that I found Vijayji. Guruji teaches in a way which is clear and understandable for the student. His lessons are very informative and enjoyable.
5
Dr Ashwin
England
Your music is Mind and Soul music. Awesome performance, and excellent co-ordination and body language between you and the Tabla player on stage. Astounding!”
5
Sandhya
England

Thank you very much for the lesson - it was great and I learned loads.

Vijay is a truly wonderful sitar player! He creates a very beautiful sound that was perfect for our event. Our guests were all very complimentary of his music and Vijay was professional and organised to work with.

5
Anna Beketov
London
Learning to play the Sitar from Guruji has been one of the most rewarding aspects in my life. Now my son has also started to learn to play the Sitar from Guruji
5
Bimal
London
I highly recommend Guruji to any parent keen on introducing Hindustani music to their child
5
Krish Vasudevan
Software engineer, Bushey England
I found the first lesson very relaxed and focused. The teaching style was friendly and I was very pleased to have been able to learn a scale within the first session
5
Gurpreet G
Medical Professional, Cambridge, England

Mr. Jagtap is a true diamond! I am SO delighted to have met him. I am taking Sitar lessons and am truly enjoying every session. He is genuinely professional in many Indian instruments including my favorite Sitar. His teaching method is really excellent I learned the basics in a couple of sessions! I’m so grateful for his kindness!

5
Sarwar Haidari
Engineer UK
Tonight, I had my first Sitar lesson with Vijay. It was one of the most amazing hours of my life. I wish more teachers out there could be like him
5
Adam
London
Vijay is patient and takes you through each step. I like the way we sing together following the notation, just like reciting a song. It helps me to play the instrument better”
5
Mohan
Medical professional, London
I found Vijay’s style of teaching very clear, his manner very encouraging, and the atmosphere totally comfortable. I thoroughly enjoyed it
5
Karmjit
London
I regularly attend the weekly online Riyaz group class, and I have seen a huge improvement in my learning and understanding of various techniques
5
Tehreem Atif
Product manager, London
Vijay is one of the best teachers I have ever had. He has a deep-rooted understanding of every aspect of Sitar music which he offers generously to all his students
0
There is something very spiritual about Indian classical music and my lessons with Vijay always tap into this spirituality. I finish each lesson feeling calm and revitalized
5
Manish
Lawyer/Writer, London

If there’s anything you’d like to know about my work or the services I offer, please get in touch. I’d love to hear from you, and I’ll do my best to reply to your message as quickly as I can.

This website uses cookies to improve your experience while you navigate through the website. Out of these cookies, the cookies that are categorized as necessary are stored on your browser as they are essential for the working of basic functionalities of the website. We also use third-party cookies that help us analyze and understand how you use this website. These cookies will be stored in your browser only with your consent. You also have the option to opt-out of these cookies. But opting out of some of these cookies may have an effect on your browsing experience.
Necessary Always Enabled
Necessary cookies are absolutely essential for the website to function properly. This category only includes cookies that ensures basic functionalities and security features of the website. These cookies do not store any personal information.
Non-necessary
Any cookies that may not be particularly necessary for the website to function and is used specifically to collect user personal data via analytics, ads, other embedded contents are termed as non-necessary cookies. It is mandatory to procure user consent prior to running these cookies on your website.
SAVE & ACCEPT