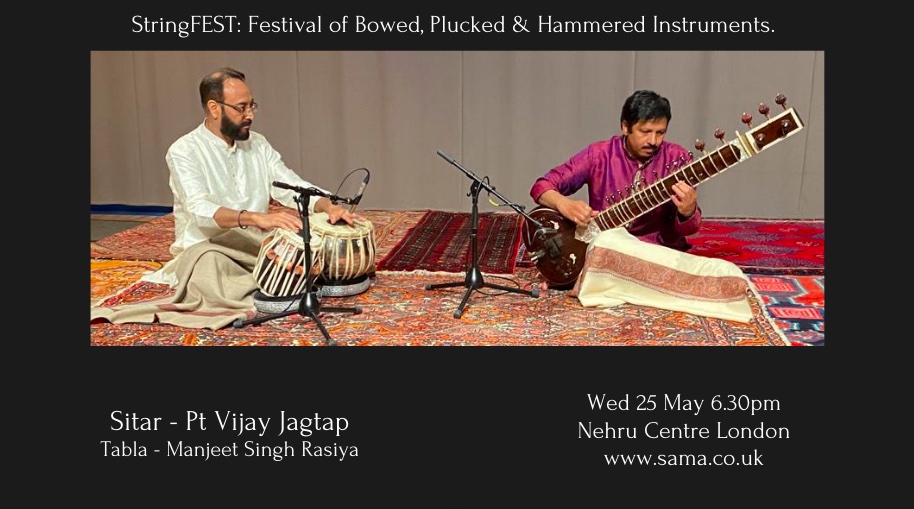 Vijay Jagtap is a passionate and an exceptional sitar player who has earned several accolades. He is regarded as UK’s acclaimed sitar players, renowned for both his technical excellence and brilliance on this stringed instrument. Vijay Jagtap holds a master’s degree on sitar from Maharaja Siyajirao University, Vadodara, India, and hails from a family of musicians.

Vijay is a committed artist who infuses sheer magic in his sitar performances. This was evident at his performances, specially the one at the Westminster Abbey, in presence of Her Majesty the Queen and his Royal Highness the Duke of Edinburgh on Observance for the Commonwealth Day. He has given several television and radio performances. His performances have often been of a brilliant artistry with beautiful compositions. He continues to perform regularly and teaches music to many students.

Manjeet Singh Rasiya is a master tabla player who performs traditional Indian and contemporary music from the Indian subcontinent. Manjeet has appeared at many festivals and is recorded on many albums. Manjeet enjoys collaborative work with UK’s Jazz musicians in a genre of Indo Jazz Fusion.

There is something very spiritual about Indian classical music and my lessons with Vijay always tap into this spirituality. I finish each lesson feeling calm and revitalized
5
Manish
Lawyer/Writer, London

When I had my first lesson with Vijay my intention was to have a one off class, but in that first hour I learned so much and I understood there was so much more to learn that I immediately signed up for 10 classes.

5
Santiago Alegrett
Sound Engineer UK
Tonight, I had my first Sitar lesson with Vijay. It was one of the most amazing hours of my life. I wish more teachers out there could be like him
5
Adam
London

Vijay is a truly wonderful sitar player! He creates a very beautiful sound that was perfect for our event. Our guests were all very complimentary of his music and Vijay was professional and organised to work with.

5
Anna Beketov
London
Vijay is an excellent teacher and great artist, and I was impressed by his style of teaching
5
Prachi
Ipswich, Suffolk, England
Learning the Sitar with Vijay is always a high point of my week. It is a real privilege to have such a talented and committed musician as a teacher
5
Jimmy Pitt-Watson
London
Vijay is one of the best teachers I have ever had. He has a deep-rooted understanding of every aspect of Sitar music which he offers generously to all his students
0
I found Vijay’s style of teaching very clear, his manner very encouraging, and the atmosphere totally comfortable. I thoroughly enjoyed it
5
Karmjit
London
I found the first lesson very relaxed and focused. The teaching style was friendly and I was very pleased to have been able to learn a scale within the first session
5
Gurpreet G
Medical Professional, Cambridge, England
Vijay is patient and takes you through each step. I like the way we sing together following the notation, just like reciting a song. It helps me to play the instrument better”
5
Mohan
Medical professional, London
Vijay Bhai is the most amazing person/guru I have ever known. The way he teaches the Sitar is beautiful, and very calming and easy to understand. Each process is taught so well. I feel so lucky to have him teach me!”
5
Priya
London
Thank you, Guruji, for continuing to teach the children via Zoom during this pandemic. The kids have thoroughly enjoyed your Tabla lessons
5
Sai School London
UK
It was an amazing performance leaving an everlasting impression over our minds.
5
Dr Prakash Kumar
Medical Specialist, Reading England
Your music is Mind and Soul music. Awesome performance, and excellent co-ordination and body language between you and the Tabla player on stage. Astounding!”
5
Sandhya
England
Guru Vijay Jagtap-ji’s patient hands-on teaching makes music really accessible. Being able to receive one-to-one instruction over nearly two decades has been a privilege
5
Dr Ondrej Pribyl
IT company director, London
Learning to play the Sitar from Guruji has been one of the most rewarding aspects in my life. Now my son has also started to learn to play the Sitar from Guruji
5
Bimal
London
Vijay is a committed artist who infuses sheer magic in his performance and mesmerises listeners with his beautiful compositions
5
Narendra Kumar
England
Thank you for the invaluable Riyaz session today. I am very happy to have attended as it inspires me to practice and play today. Best wishes.
0
My 10-year-old daughter and I have been learning Sitar from Pandit Vijay Jagtap since November last year. From the very first lesson, we both came away feeling very peaceful.  He’s kind, tolerant, patient, cultured, expert in his field and enjoys what he teaches. As for myself, have learnt a lot more in the last few months with Pandit Vijay Jagtap. I would most definitely recommend this teacher. We are both really enjoying our lessons… so much so that I’m waiting for my next child to be old enough to learn from him too!
5
Vrinda Kishori
London

Mr. Jagtap is a true diamond! I am SO delighted to have met him. I am taking Sitar lessons and am truly enjoying every session. He is genuinely professional in many Indian instruments including my favorite Sitar. His teaching method is really excellent I learned the basics in a couple of sessions! I’m so grateful for his kindness!

5
Sarwar Haidari
Engineer UK
One of the most highly acclaimed British-based Sitar artists. He is renowned for both his technical excellence and brilliance on strings
5
Swarupam,
London, England
I regularly attend the weekly online Riyaz group class, and I have seen a huge improvement in my learning and understanding of various techniques
5
Tehreem Atif
Product manager, London

If there’s anything you’d like to know about my work or the services I offer, please get in touch. I’d love to hear from you, and I’ll do my best to reply to your message as quickly as I can.

This website uses cookies to improve your experience while you navigate through the website. Out of these cookies, the cookies that are categorized as necessary are stored on your browser as they are essential for the working of basic functionalities of the website. We also use third-party cookies that help us analyze and understand how you use this website. These cookies will be stored in your browser only with your consent. You also have the option to opt-out of these cookies. But opting out of some of these cookies may have an effect on your browsing experience.
Necessary Always Enabled
Necessary cookies are absolutely essential for the website to function properly. This category only includes cookies that ensures basic functionalities and security features of the website. These cookies do not store any personal information.
Non-necessary
Any cookies that may not be particularly necessary for the website to function and is used specifically to collect user personal data via analytics, ads, other embedded contents are termed as non-necessary cookies. It is mandatory to procure user consent prior to running these cookies on your website.
SAVE & ACCEPT